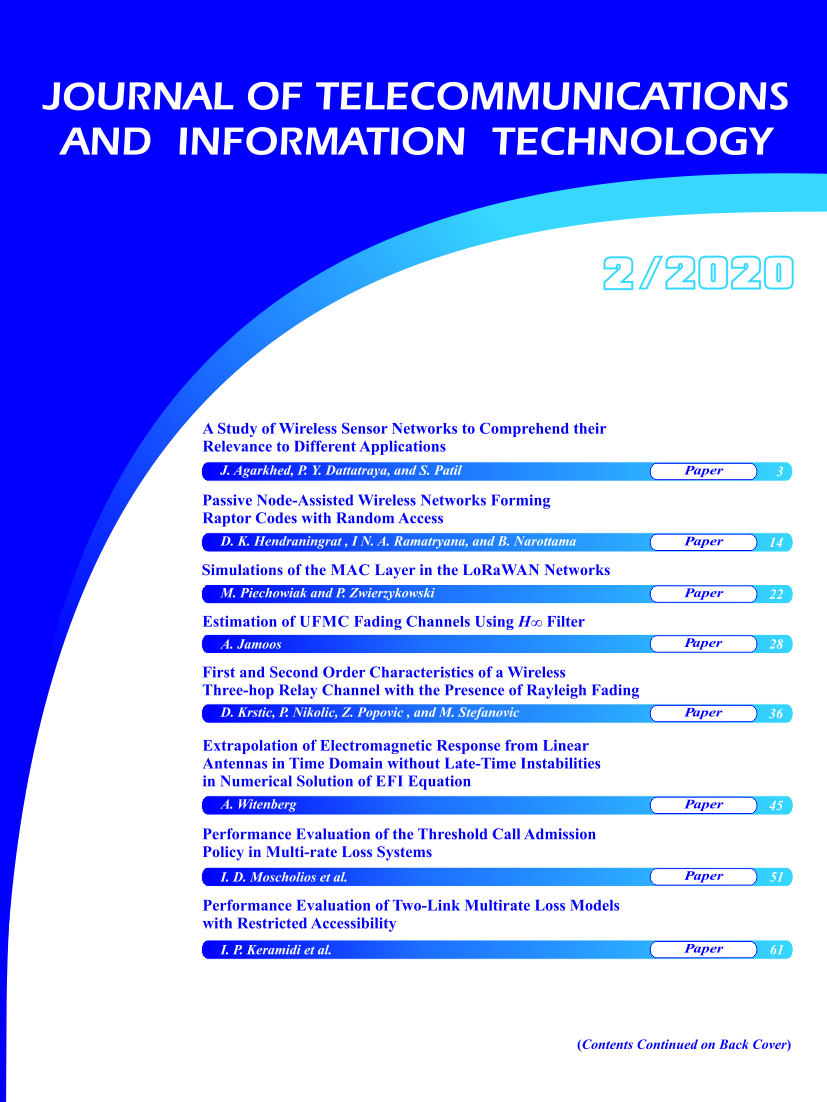 The first article, titled A Study of Wireless Sensor Networks to Comprehend their Relevance to Different Applications is written by J. Agarkhed, P. Y. Dattatraya, and S. Patil. In this paper, the significance of WSNs is illustrated, with the focus placed on demands and understanding of the research problem and on analyzing it based on literature review.

The next article, titled Simulations of the MAC Layer in the LoRaWAN Networks (M. Piechowiak and P. Zwierzykowski) considers communications-related problems in IoT (Internet of Things) systems. The article provides an overview of major LoRa MAC network simulators. It presents and comments on the most important research results obtained by the authors of the aforementioned software.

The next paper by A. Jamoos is titled Estimation of UFMC Fading Channels Using H¥ Filter. The estimation and equalization of UFMC fading channels based on the comb-type pilot symbols arrangement, are considered in this paper.

A new hybrid method of solving integral equations concerning electric field in the time domain, as used for modeling linear antennas with pulse excitation, is proposed in the article titled Extrapolation of Electromagnetic Response from Linear Antennas in Time Domain without Late-Time Instabilities in Numerical Solution of EFI Equation (A. Witenberg). The method consists in a mixed, numerical-analytical description of the process that helps in keeping the stability of calculations over late time.

Three subsequent papers are concerned with problems related to analytical modeling of telecommunications systems. The paper titled Performance Evaluation of the Threshold Call Admission Policy in Multi-rate Loss Systems by I. Moscholios, I.-A. Chousainov, P. Panagoulias, P. Sarigiannidis, and M. Logothetis considers a multi-rate loss system of a single link that services random or quasi-random trafic under the TCA (Threshold Call Admission) policy. The analysis presented is based on reversible Markov chains.

A new multirate loss model for the call-level analysis of a two-link system with restricted accessibility that accommodates Poisson or quasi-random arriving calls of different service classes is proposed in the next article titled Performance Evaluation of Two-Link Multirate Loss Models with Restricted Accessibility (I. P. Keramidi, I. D. Moscholios, P. G. Sarigiannidis, and M. D. Logothetis). In the system under consideration, each link may support calls offloaded from other links.

The last article from this group is titled Modeling of Complex Non-Full-Availability Systems by S. Hanczewski, M. Stasiak, and M. Weissenberg. This article presents an analytical model of a complex non-full-availability telecommunications system. The model may be used, in the future, for analyzing cloud computing systems.

The next paper, titled V2X Communications for Platooning: Sensor Inaccuracy Aspects by M. Sybis, P. Sroka, and P. Kryszkiewicz, discusses the impact of sensor inaccuracy on the performance and behavior of autonomous vehicle platooning that relies on wireless communications aided with context information sourced from various databases and maps. Platooning is a potential future application of autonomous driving.

The next paper, titled An Expert System for Automatic Classification of Sound Signals, by K. Tyburek and P. Kotlarz, presents the results of research concerning classification methods used for recognition/classification of audio signals. In this work, a particular emphasis was placed on fine-tuning the fuzzy classifier model and on neural classifier applications, taking into account new neural networks that have not been studied so far for sound classification purposes.

The last article is titled Retransmission as a Replacement of Forward Error Correction in Noiseless LV Networks Used for Narrowband PLC. Its author, P. Kiedrowski, describes a project under which PLC technology is used in railway light signals. The solution proposed increases reliability of communication between railway light signals and railway automation centers, using the frame retransmission approach instead of deploying the FEC (Forward Error Correction) technique.

We would like to thank all the authors and reviewers for the effort they have put into preparing this issue of the Journal of Telecommunications and Information Technology.

Improvement of the linguistic quality of the journal; Assignment of DOI numbers; Access to the anti-plagiarism system; Editing and printing of the journal - tasks financed under 706/P-DUN/2019 agreement from budget of the Ministry of Science and Higher Education under the science dissemination fund.